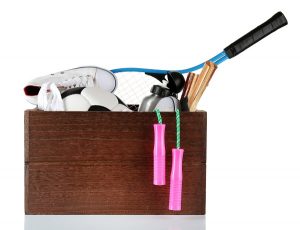 At the beginning of the year, we often create a list of resolutions. The list can include things we want to do, goals we want to achieve, and intentions for how we want to be. However, one of the most useful things that we can do to create a foundation for success is to clear out and organize our physical things.

When I coach clients, we often start by getting rid of stuff. It’s amazing what a clean, spacious, and organized closet can do for you if you are feeling stuck or frustrated in life.

There are lots of people out there who have ideas and structures for getting your home organized. When my own children were small, I found FlyLady. She got me to run through the house for 15 minutes with a trash bag, collecting things to set free for other people’s enjoyment and use. The two questions that she had me ask were “Is it useful?” and “Do you love it?” A yes to either question meant I got to keep it.

Now, of course, Marie Kondo’s system is all the rage. It varies some from FlyLady, but she has us asking the same basic questions. I think that both of them are missing one of the biggest challenges to getting rid of clutter: many objects represent our dreams for the future.

We all have a clear idea of what we want our futures to hold. We don’t always say them out loud, but we have a vision and a mental to-do list. For example, for a few years, I was determined to go to Italy. I had listened to the book Under the Tuscan Sun (which is absolutely nothing like the movie.) The book is a sort of mundane account of a woman and her husband who decide to buy a home in Italy.

My then middle school-aged children mocked me for listening to the author tell her story in her Southern accent. But the story and life intrigued me. I wanted lemon trees and arugula growing along the driveway.

In support of that dream, I bought books about Italy. I got flashcards to learn to speak Italian. They set on the “someday” shelf on the bookcase in my bedroom.

One day I was clearing books and deciding what to get rid of. By that time, the Italy collection had been collecting dust for several years. I hadn’t talked much about my dream, but my then-spouse didn’t have much enthusiasm for the idea. I also realized that I didn’t really want to live that far from my family.

I decided to give up that dream. It hurt, but it was also freeing. There were a lot of “shoulds” wrapped up in the dream, like learning Italian and saving money. It made me sad to give up the dream, but I knew it wasn’t going to happen, and I gave away the books that represented the dream.

One of the most difficult things for me to get rid of was a pair of rollerblades. At the time, I had always considered myself an athlete. I played sports in high school and continued to be active. In my 20s I could ski backward down a German mountain slope. In my 30s, I carried children and all of their accouterment to various activities. In my early 40s, I carried camping gear and hiked with Boy Scouts as an Assistant Scout Leader.

When I was 49, I had brain surgery to correct an abnormality. I now live with five tiny platinum coils in my brain. In the couple of years before and since, I was not athletic. In fact, I feel nauseous and dizzy if I break a sweat or lift something heavy. I am not who I was by any stretch of the imagination.

I was clearing out the garage and came upon my dusty rollerblades. I had tried them and wasn’t great, but I had hopes of mastering rollerblading. At that moment, I realized that I was never going to rollerblade. Bigger than that, I was no longer athletic. Wow, what a blow that was. It sounds obvious, but moving from who I wanted to be to who I actually was was incredibly difficult.

I put the rollerblades into the give-away pile while sobbing. It was letting go of the self-image and the thing that represented that self-image.