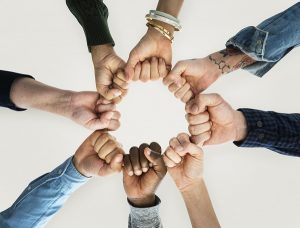 Ideally, we want our people on our teams and in our organizations to behave a certain way. For example, we want them to be respectful, efficient, and productive. We can create a culture that defines and supports those behaviors. Creating a culture intentionally makes a leader’s job much easier. The culture that we create at our level may not exactly align with the organization’s culture, and that’s okay. We can decide that within our group there are certain behaviors that are important to ensure individual and group success.

We can begin creating the culture that we want by having our group or team design an alliance together. The Designed Alliance is a guideline for acceptable behavior for the group. Sometimes the agreement is called Ground Rules. When we get the group together to design an alliance, we want to make it clear that we are going to decide together on some standards of behavior. Handing down rules about acceptable behavior is not as effective.

First, we want to decide on the sort of atmosphere or emotional field in which we want to work. The group can list qualities that they want to bring into conversations. “Respect” is usually a good start. Many groups list “open-mindedness” and “humor.” Make sure the qualities are reasonable and attainable by everyone. Once the group has discussed the atmosphere it would like to create, it’s important to consider which behaviors would help the group achieve that atmosphere. For example, one ground rule could be “No sarcasm” in order to support a positive work environment.

Another good discussion is about what would help the individuals in the group and the group itself to do a good job. It might be a weekly meeting or a commitment to provide information quickly. The group might decide that daily progress reports are needed. The discussion might include a request for a less hostile attitude toward necessary requests. The Designed Alliance should address the individual needs that are going to help the group succeed. It’s a great time to remind everyone of how their actions support the goals of the group and the organization.

A specific discussion of how the team wants to behave when things get difficult is crucial for the Designed Alliance. Many groups have trouble handling conflict. Generally, groups avoid discussing differences of opinion, or they yell. Of course, the yelling is what encourages avoidance. Sometimes it helps to talk about how an ideal team would handle disagreements. How would The Perfect Team handle conflict? Having the discussion in terms of how an ideal team would handle conflict can make the discussion less personal.

In creating guidelines for behavior, a discussion of what the group doesn’t want to happen can lead to some specific behaviors that they want to include. A group normally has pretty clear ideas about behaviors that they don’t want to see. When writing out the Designed Alliance, we want to state the opposite positive behavior, rather than a negative behavior. For example, if the group says it doesn’t want dishonesty, we would include “Be honest.” If they don’t want yelling, we could include “Use a professional or respectful tone of voice.”

The Designed Alliance isn’t useful if no one adheres to it. The group must decide what they are going to do if someone breaks one of the agreements. This Designed Alliance belongs to the group, and it isn’t the supervisor’s job to enforce it. It really is up to the entire group. Many groups decide to gently remind the person about the agreement. Often, they also explicitly add that no one will get defensive or angry when reminded. There are many different ways for a group to remind each other about the Designed Alliance.

If the discussion feels like it could go further, there are a couple of other questions the group can discuss:

Once the entire agreement is written, it’s important to make sure that everyone agrees to the rules. The final task is to have everyone look at the list, and ask if there are any questions or problems. We want to give everyone a chance to disagree with the items on the Designed Alliance. Ensure the group understands that they are committing to behave in alignment with the Designed Alliance. It’s easy for everyone to nod their heads or just be silent if they disagree. It’s a good idea to ask the group to stand if they agree to act in accordance with the agreement and to hold others accountable as well.

At this point, someone could refuse to stand, and that’s okay. In that case, we all sit down and talk about the person’s reservations. If one person refuses a guideline, it’s best to take it off the list. If the action in question is a part of the person’s job or common professionalism, we want to schedule a coaching session on that topic privately.

There are a few things that can be included in the Designed Alliance that are useful. If these guidelines don’t show up in the discussion, it’s a good idea to mention them to the group. The group can reject them in the end, but it’s good to at least talk about them.

We agree that everyone’s perspective is, at least partially, right.

In agreeing that everyone’s perspective is partially right, we are explicitly acknowledging that there is usually more than one valid way to view a situation. There isn’t, necessarily, a right and a wrong. This perspective makes the discussions and the disagreements a lot easier because we don’t paint someone as totally wrong. As a result, the discussion continues, and we foster the positive relationships that help the group function more effectively.

We will listen to each other’s ideas and perspectives with an open mind.

This guideline means that we are open to being influenced by others. We will go into the discussion with the intentional perspective of looking for things with which we can agree. In essence, it’s agreeing to listen and being open to changing our minds. If people are resistant to the idea of being open-minded, we can remind them that listening with an open mind does not require agreement in the end.

We will always be respectful to one another.

Being respectful is usually brought up pretty early in the discussion. However, if no one mentions it, it’s a good idea to bring it up for discussion.

We won’t leave a meeting where a decision was made and complain about the decision to others if we didn’t speak up in the meeting.

Finding someone to complain to after we haven’t spoken up in a meeting is called triangulation. The group is agreeing to bring up their reservations and complaints in the meetings when the group can discuss the point of view together. It also means that when approached by someone wanting to complain outside of a group meeting, we will remind them that we’ve agreed to discuss issues as a group, not privately and individually. If the group agrees to discuss things together in an open way, that is a huge step forward for the group.

We will share our thoughts and feelings on a topic.

If the group agrees not to triangulate, a person could avoid the situation by never talking to anyone about his or her ideas or reservations. The solution is a separate guideline that requires everyone to speak their minds. The group can’t deal with issues unless they are brought out into the open for discussion. The Designed Alliance helps to create an environment and a culture where people talk and solve problems and share perspectives in a positive way. However, ultimately, it’s up to us as supervisors to maintain a safe space where people are comfortable proposing opposing views. If people believe that they will be harassed or ignored, no amount of coercion will get them to share their opinions.

We will presume good intent.

Instead of assuming that someone is being mean-spirited, we will first assume that their motivation is positive. It saves a lot of emotional pennies and hurt feelings. The only way to know someone’s intent is to ask. Until we ask, we presume good intent.

The Designed Alliance is a powerful tool that helps to create the psychological safety that a team or group need to excel. We work better when we feel free to share our ideas, disagree, and take reasonable risks.