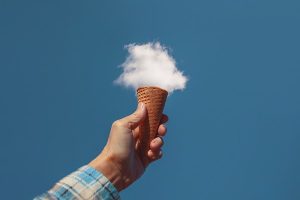 Brené Brown turned silver-lining into a verb in a video on sympathy vs. empathy. You can watch it here if you are interested. I love her discussion on silver-lining things.

When someone is upset about a situation, we want to make them feel better. It’s a natural reaction, but not always a helpful one. Sometimes we feel compelled to show them the bright side of a situation – also not really helpful. When we do that, we are silver-lining. A tip-off that we are silver-lining someone are the words “At least.”

For example, let’s say that I am expressing frustration about not getting a gig after spending a lot of time on writing a proposal. The people listening want to cheer me up and make me feel better. They might say, “Well, at least you still have your health” or “At least you still have that other job that you are working on.” Both true perhaps, but the statements are not going to improve the situation or make me feel better.

After I watched Brown’s video, I started noticing a lot of silver-lining going on. A friend and fellow coach with a soft and nurturing heart who doesn’t like to see people suffering was the first person I noticed. She called me when I was seven hours into an eight-and-a-half hour drive. She asked me how much further I had to go, and I told her. Her answer was, “At least you only have an hour and a half to go.”

I felt like smacking her upside of the head. I wouldn’t ever, but I felt like it. Her statement made me angry. The point was that I had an entire hour and a half of torture left! I was tired, and my back hurt. I was bored and felt like I couldn’t take another moment in the car. Her silver-lining had totally dismissed my feelings and situation. Her statement had the exact opposite effect of what she intended.

My friend was the first person who I thought of and noticed, but I should have seen myself first because I am also guilty of silver-lining! I am a champion at silver-lining, especially with my children. They complain or share a frustration, and I want to show them that things are not that bad. I will say something like, “At least you have friends you enjoy at work” or “At least you have a car that runs.” Ack! I’m working to never silver-lining them again.

I noticed silver-lining again in a leadership workshop. We were talking about communication toxins. Small groups were creating skits to show each toxin and an antidote for each. Communication toxins are criticism, defensiveness, contempt, and stonewalling, in case you are curious. They come from John Gottman’s research on couples.

I heard a lot of “At least” when they were creating their skits. We stopped and talked about better ways to deal with the toxins and, in general, situations when people were feeling some negative emotions.

The first step is to identify and acknowledge the feeling that the person is experiencing. Susan David, author of Emotional Agility: Get Unstuck, Embrace Change, and Thrive in Work and Life, advocates facing all of our feelings, even the uncomfortable ones. Before we can face them, though, we have to name them.

In coaching, after naming an emotion, we normalize it. It’s important for all of us to be reminded that it’s normal and acceptable to feel some of what are termed “negative” emotions. In truth, emotions are just emotions. They are not inherently good or bad, positive or negative. Our emotions are natural reactions to events.

Now, we can control our emotional reactions to some degree, but that’s a different conversation. Now we are just naming and normalizing. Remember that silver-lining does not help someone reframe a situation or feel better; it’s not the solution.

Let’s go back to my road trip example. I sigh and say I have an hour and a half to go of an eight-hour drive. One good response could be, “That is a really long drive. I bet you are tired.” I might respond with something like, “I am tired! My back is sore, and I am so bored that I can’t stand it.”

At this point, most of us want to send a solution like “Why don’t you listen to an audiobook?” or silver-lining the situation with “At least most of the drive is behind you.” Resist!

It’s time to normalize and help them name and accept the emotions that they are feeling. We might say, “Of course you are tired! You’ve been sitting and focusing on driving for hours!” Hearing that kind of response makes us relax because we feel seen and heard.

Naming and normalizing emotions can also open the door to furthering the conversation. Once I feel that someone is listening and empathizing, I might say, “Long drives are terrible – and my children live so far away.” I’ve shared something else that is troubling my mind as I drive hour after hour.

Once again we are presented with the temptation to do some silver-lining because we want to make people feel better. We don’t want to say, “At least you get to see them every few months.” Instead, we want to name and normalize again by saying something like “It is frustrating that they aren’t closer to you.” No solutions or silver-lining – only listening and empathizing.

When we silver-lining people, we create resistance and an adversarial conversation. They feel compelled to defend the emotions that they are feeling. They don’t feel listened to or understood. Remember my gut reaction when my friend said, “At least you only have an hour and a half left.” I was immediately angry.

When we acknowledge the feelings and listen, we let people know that their feelings are valid and normal. We also let them know that we value them enough to really listen to them in order to understand what they are feeling. Our personal needs are to be listened to, understood, and respected. When we meet those needs, we help others relax into their situations, gain some perspective, and maybe find a solution.

Or maybe they just feel better because they aren’t alone with their feelings. Empathy, rather than silver-lining, goes a long way towards creating positive relationships, which are the hallmark of great leadership and a happy life.