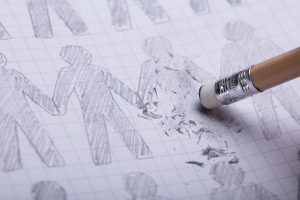 I recently watched an episode of The Orville. For you non-sci-fi people, it’s a TV show about people exploring space. It’s similar to Star Trek: The Next Generation, but with fewer leadership paradigms and more crass situational comedy. Sometimes, however, they have a gem of an episode.

In the one I just watched, a time capsule from 2015 has been discovered, and an iPhone is in it. They figure out how to get the phone up and running. It belonged to a young woman named Laura who left all of her texts, emails, photos, songs, etc., on the phone so that the future could get a glimpse of her life.

One of the characters, Gordon, finds her enchanting and gets the ship’s computer to create a simulation based on the information in the phone so that he can experience Laura’s world in the holodeck. (If you have no idea what a holodeck is, email me. We need to talk.) The doors to the holodeck open, and Gordon walks into a party at Laura’s house.

Gordon meets the recreated Laura and falls in love with her. Unfortunately, the simulation is based on information in the phone, and the real Laura got back together with her boyfriend in 2015. Gordon is heartsick and has the computer delete the boyfriend from the program. When he re-enters the simulation, Laura is a different person.

She doesn’t play angsty songs about love in a dive pub. She is more driven to move up at Macy’s, where she works. She is still charming but different. She turns out to be a different person when her boyfriend is completely deleted from her life. He was the one who encouraged her to sing and perform.

Of course, the show got me thinking about what I would be like if I had the ability to delete people from my life. Not just delete them now, which I can actually do to some extent, but to erase them so that I had never interacted with them.

The first person to come to mind was my father. We have a stormy history. Obviously, if I completely delete him, I delete myself. He is my father. So let’s just look at how I would be different if he had not had any part in my growing up.

It’s an interesting question because I get some of my best and worst qualities from him, I think. Of course, there is no way to know for sure. This is just an interesting game.

My father told me when I was young that I could do anything. I played softball in elementary school and pitched fastpitch in high school. On the ring finger of every glove that I owned he wrote, “This is a winner’s glove. I never miss a ball.” I think a lot of my confidence comes from him.

I believe that my silly bravery comes from him also. I am not afraid to make a fool of myself. As a result, I am not afraid to take risks. I have a clear memory of skipping with him through a parking lot on our way to see a movie. It was, in fact, the second movie of the day for us. We saw The Sting with Redford and Newman then drove across town to see another one of the duo’s films, Butch Cassidy and the Sundance Kid. I remember people snickering at us as we skipped and really not caring.

The other thing he told me over and over was “Make them come up to your level. Do not lower yourself to theirs.” As a tall, opinionated, and pretty young girl, I took a lot of mean hits from classmates. I started at a private school in 8th grade, where they were particularly vicious in the beginning. Even the teachers were mean to me. I have tried to live by that phrase for all of my life – even when dealing with my father, who is not always kind, truthful, or supportive.

I also get my temper from him, which I’ve worked most of my life to control. He passed on his contempt for others who are different than us or less fortunate. Man, that one is hard to spot and change because it feels like truth until you really bring it to a conscious level and examine it. I work to see everyone as a person of value with dreams and needs equal to my own. I slip sometimes, but it’s at a conscious level that I can now deal with.

I could go through the same “what if I delete them” exercise with my ex-husband. We were married for 36 years, and he influenced who I’ve become more than my father did.

When we were separated, I went through our pictures and belongings, deciding what to keep and what to leave behind. I remember sitting in a closet under the eaves of our home surrounded by albums and boxes that contained 35 years of photographs and memories. I felt a real urge to destroy everything that had to do with my ex. It was a tumultuous time, and my emotions were very raw. Then I realized that I would have to delete 35 years of my life to do that. However, it’s really, really hard to be mad at a person now and not take it out on every memory with that person.

Hurricane Irma had just devastated much of Florida. I thought of the people who had lost all of their belongings and pictures. Some had lost loved ones. They were going to have to rebuild their lives from scratch. In a way, I was experiencing a hurricane in my life.

I could see the disaster coming. I was divorcing and moving out of my home. I could prepare for it, but I couldn’t avoid it. The hurricane would come in and take away everything familiar. I would put some belongings in storage and load the rest up into a U-Haul trailer that I would drive away with. I planned to be homeless for a while. I would rely on the kindness of friends and family.

In my mind, I decided that the husband in this history of photos was lost in my metaphorical hurricane. I loved him, and I missed him. I still had to deal with this husband in the now that I wasn’t terribly fond of, but I wanted to find a way to keep hold of the good memories. I was made from all of those experiences. I am who I am today because I was married to a man who I loved for more than 30 years.

He helped me develop my corny sense of humor. I hear one of his favorite phrases, “Maybe, we’ll see,” in my head all of the time. It represents a less rigid approach to life that I learned from him. I cherish the sense of belonging and teamwork that I experienced in our marriage. It was a great feeling that I am now working to recreate with friends and clients. I am more relaxed, fun, and resilient as a result of our relationship.

It was freeing to look at the photographs without malice. This lovely guy was taken by the hurricane. I can remember and love him and the memories.

I wouldn’t delete my ex from my past any more than I would delete my father. I have little to no interaction with either now, but it’s important for me, my sanity, and my well-being to feel gratitude toward them both for helping me develop into the person that I am now. The good times and the bad helped me see the good in myself and build resilience, which comes in mighty handy in life.

In The Orville, Gordon decided the same thing. He put the boyfriend back into the program, went into the simulation, sang a song with Laura, and said goodbye to both her and her boyfriend.

Even the cruelest people in our pasts have helped us to develop into who we are now. We get to choose how we grow by how we react and what we take away from the experiences. We lose all the opportunities for growth and self-awareness if we negate the person and ignore the experiences.

In my mind, I give difficult people in my past a hug, thank them for the lessons, wish them well – then tell them not to let the screen door hit them in the butt on their way out the door. Boundaries in the present are essential, but that’s a topic for another time.