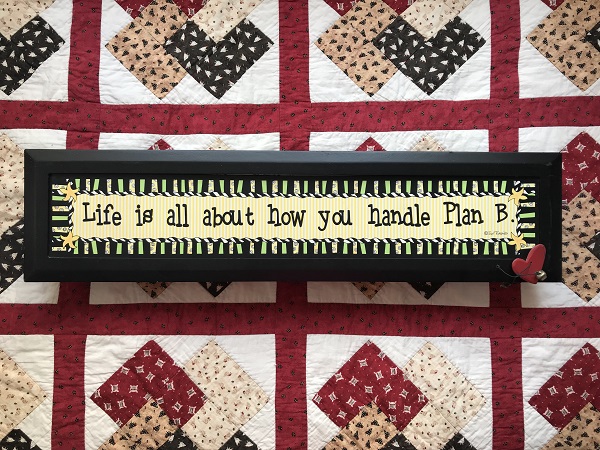 I recently spoke to my Ex-Husband, Oldest Son, and Youngest Son all in one day. There was a time when I would have felt that it had been a wonderful day. However, times are not what they were, and all three conversations were distinctly unsatisfying.

The bottom line is that three people who were once closest to me and each other aren’t close at all anymore. The reason is a series of complicated stories that are not mine alone to tell. It feels like a Greek tragedy where everyone has done what they had to do to be true to themselves and no one is wrong, yet no one is exactly right, either.

The conversations unsettled me. I wallowed a bit in the fact that I have failed in one of my life’s major goals. I spent decades creating a loving family. At 22 years old, I decided to marry my Ex and make family the center of my life. I consciously decided to make family my first priority and career second. I gave up a job offer at a prominent PR firm to follow my new husband to Germany. It was a choice, and I made it on purpose.

My Ex and I had six years together before we had Oldest Son. They were very happy times. We were young, healthy, hopeful, and in love. My decision to put family first appeared to be a very good one.

Then we had Oldest and Youngest Sons within two years of each other. We were a young military family who stuck together as we moved. My mother moved in with us and made us a happy family of five. My decision to put family first appeared to be a very good one.

The kids grew, and we were all a team. We all supported my Ex in his military career. It felt good to have common goals and to work together at Cub Scouts, Boy Scouts, and military life. My mom’s presence made our lives easier and more fun. I enjoyed all the phases of being a mom and staying home with my two boys. My decision to put family first appeared to be a very good one.

My decision to put family first was influenced by a story that my high school basketball coach told me. He was divorced and single at that time. He told me that he had spent Christmas day alone, driving through town looking at all the lights. He said it was nice, but the melancholy tone in his voice and the pained look in his eyes told a different story. At 15 years old I decided that I never wanted to find myself in that position. I wanted always to have family around me for holidays.

Fast forward to now. I live alone in a small condo. I share walls and ceiling with others. My beloved Honda Pilot whom I call Amber sits out front with no shelter. She is my view from my front windows. Other people’s vehicles are my view in the back. Not one relative lives in the state that I live in. Oldest son lives with my grandchildren in New Jersey. Youngest son and his new bride live in Texas near my sister and her family. I am now almost 60 years old. I’ve spent a lifetime creating a family that has disintegrated. Putting family first doesn’t feel like the best decision I’ve ever made. Maybe it was and I just failed. I failed at my life’s main work.

Now, I spend most of my time alone. I have good friends where I live. I enjoy them and depend on them. I am working to create a community here. I visit Oldest Son and Youngest Son individually. It is Plan B. Plan A failed, and I feel like a failure trying to make the best of a situation I do not want to be in.

After wallowing about the unplanned results of my life and my feeling of being a complete failure, I remembered the most valuable lesson that I learned when getting my MBA. It was taught in terms of financial investments, but it applies to all aspects of life. When deciding what to do when moving forward, do not consider the sunk costs – what’s already been invested. Forget the past, and look hard at the present. Given the current situation with no thought to the past, what is the best thing to do? I translate that to: We are where we are. What do we do from here? More accurately now: I am where I am. What do I do from here?

Not considering past expectations removes an enormous emotional burden. I use a hurricane metaphor to help me get past the recent changes in life. A huge hurricane came through that destroyed everything and caused me to start life again. It wasn’t my fault, and there was nothing I could have done to avoid it. That mindset helps me see the current situation more clearly because it clears all regrets. Whether it’s true or not doesn’t matter. I am where I am, and blame and failure are irrelevant. Nothing can change the present.

The future is another matter. It can be changed! Or not. I could continue to wallow and rewind the past in my head, which would lead to an icky future that is not much different than the present. Good thing I have a Magic Wand of Destiny and the Power of Choice. I’ve written a lot about goals, making intentional choices, finding your Big Why, and taking baby steps forward. Insert all of that information here. I am assessing my current situation objectively, finding my motivation, and making a plan.

However, there is another thing to consider that will help – mindset. I read a story in leadership workshops from the book Whistle While You Work by Richard Leider and David Shapiro. Leider tells about a time that he went on an East African adventure with Outward Bound. The group found themselves walking through tall grass, and one person saw a lion. The grass is called Lion Grass because it’s one of a lion’s favorite hunting grounds.

The gravity and danger of their situation suddenly hit home to the person who had seen the lion. He sat down and refused to go on. He wanted to turn back, but the truck that had dropped them off was en route to the meeting place ahead of them. There was nowhere to go back to. I can definitely relate to the situation and the feeling!

The leader talked with the shaken man and explained the situation. It didn’t help. The man refused to move. Then the leader offered an Outward Bound motto: “If you can’t get out of it, get into it!” In other words, if there is no way to remove yourself from an unwanted situation, the answer is to completely get into it so you can move yourself through it as quickly as possible.

I’ve actually reminded myself of this concept several times throughout my life. If I took on a task or job that I didn’t like but didn’t want to quit, I chose to completely get into it. The journey was less painful, I was successful, and the end seemed to arrive more quickly.

So, what does “getting into it” look like? It’s about being all in. A friend once told me that she liked watching me play basketball in high school because when I played, I was all in. To me, it means that no part of me is playing the observer; all of me is completely present in the experience.

That is how I want to be now as I create a life that is nowhere near the expectations I held for decades. I want to be all in. I want to really get into it. I want to be fully engaged with no part of me sitting on the sidelines complaining or being hesitant. I am drawing my line in the sand and stepping over it into a life I completely accept and intend to enjoy. I am where I am, and I’ve decided to like it.

P.S. This little girl is my current role model: https://www.youtube.com/watch?v=qR3rK0kZFkg