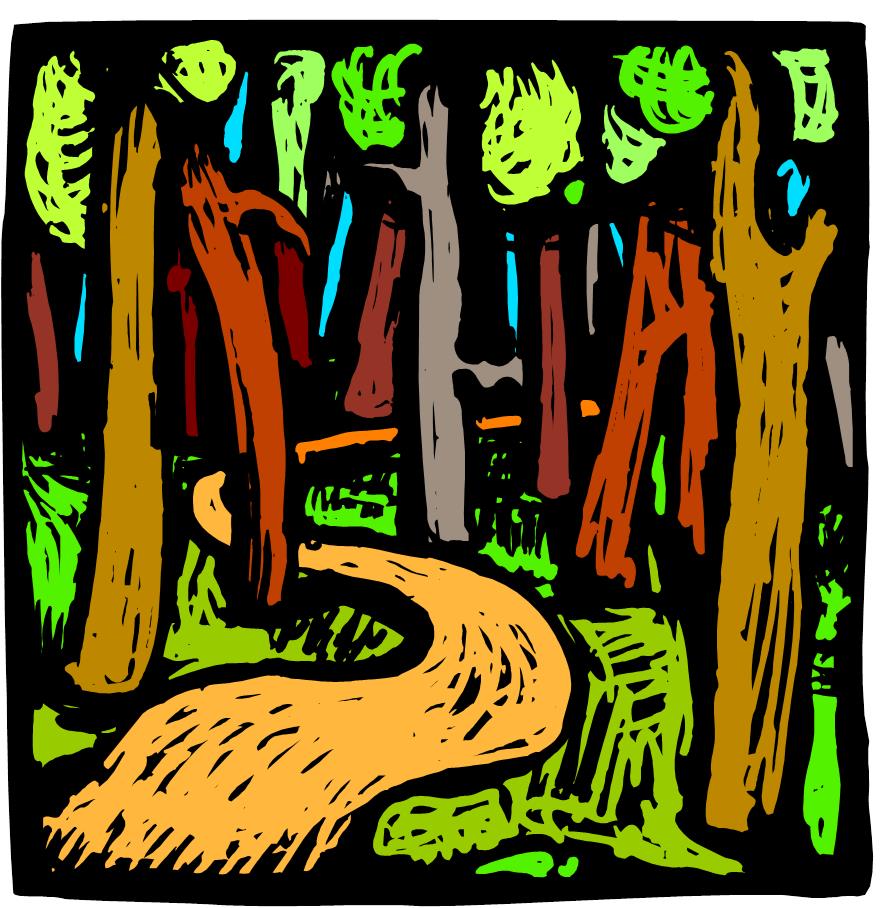 Note: This is a blog that I wrote back in February 2014. I’m publishing it again as much for a reminder to myself as anything else. I’ve added additional thoughts at the end.

The mental image of a path always makes me think of the last lines of Robert Frost’s poem, “The Road Not Taken”:   “Two roads diverged in a wood and I – I took the one less traveled by, and that has made all of the difference.”  Taking the brain path that is less traveled, or even creating a new brain path, is the way to change thought patterns that are not serving us.

Most of the time we glide into thought patterns without thinking.  We could be imitating a parent. Perhaps our current thinking is influenced by a set of circumstances in our past.  The first step is to ask, “Is this way of thinking serving me now?”  It might have been useful when you were a child and under the control of others, but it might not be useful now.  Maybe it never was useful. It’s time to take a fresh look.

Sometimes an event can put us on a mental path that is keeping us stuck in the past or in a negative way of thinking.  Way back when I was in high school, I would obsess over any mistake that I made.  If I said or did something that hurt someone’s feelings or embarrassed me or was just plain stupid, I would play it in my head over and over.  After a while, I realized that replaying it wasn’t useful.  It made me sick to my stomach and kept me on the “I am an idiot” path.  I came up with a solution that I learned 30 years later is called cognitive restructuring.

First, look at the offending situation.  What lesson can you learn?  How can you avoid repeating the mistake?  Decide on a one-sentence lesson you have learned. Then take the lesson forward and leave the details behind.

I will share a particularly humiliating example. In high school, I was head-over-heels for a guy who dropped me and started going out with someone else.  I was so hurt and angry.  I drove past his house one evening and saw that his car was out front.  I stopped.  It was unlocked.  I don’t remember the details, but I messed up the inside and outside of his car.  No permanent damage, but afterward I was so ashamed and humiliated.  He had to have known it was me.

I acted on impulse out of anger.  I acted childishly.

Second step: How could I avoid the same mistake in the future?

No acting out in anger.  I have poor judgment when I am angry. No childish behavior.  That wasn’t who I wanted to be.

Step four:  Think about something else.

I forced myself to go over my to-do list or start reciting song lyrics, anything to get me off of the path of replaying the event.

I didn’t just have to redirect my thoughts once.  I had to do it over and over again.  The key is consistency and determination. I had to stay off the well-worn path to let the branches, vines, and grass take over and make it disappear. Eventually, the path grew over.  Today, I can only recall the lesson, not the details.

In the time since I’ve discovered that replacing the offending thought pattern with a thought that creates a feeling of gratitude is even more effective.  If you are feeling grateful, you cannot feel any other emotion.  It replaces fear, unhappiness, and resentment.  How cool is that? Way better than to-do lists. The key is to make the gratitude path wide and clear—very easy to follow.  Line the gratitude path with images and memories that touch your heart because those have the most power. Then you can call them up easily and take that alternate gratitude path whenever you are tempted to take the one you’ve declared off-limits.

A friend pointed out that we don’t control individual thoughts that surface unbidden.  I guess that’s true to some extent.  However, what’s important here is that we have the power of choice.  We decide what to do with any unbidden thoughts and how long we let them linger.

Like the traveler in Robert Frost’s poem, we get to choose our paths.  We influence new thoughts by which paths we keep clear and which we let grow over.  We choose the tone of our internal dialogue.  We choose which paths to cultivate in our minds, and through those choices we choose the types of people we are going to be.

Final note: Man, 2014 feels like a very long time ago. It was most certainly another life. Rediscovering this blog feels providential because I am working to release a lot of anger and resentment over some life events that have happened in the interim. All of them are infinitely more serious than a high school prank.

The actions are not necessarily my own, but the events, circumstances and anger have had me firmly in their grip. I have been caught in an endless loop of negative thinking and blaming for quite some time.

I’ve decided that my takeaway phrase is “Shit happens, and most of it isn’t my fault.” I am not absolving myself of all responsibility, but stuff like injuries, illnesses, other people’s decisions, and COVID-19 are definitely not my fault!

This time around I am using one song lyric consistently to replace unbidden, negative thoughts and emotions. It honestly came to me while I was asleep, and it brings me great comfort. It feels like a message from Spirit. The song is “Just Remember I Love You” by Firefall. The specific lyric is “Just remember I love you, and it’ll be alright. Just remember that I love you more than I can say.”

A spiritual grounding is important for leaders. We must stand on a firm foundation to lead effectively. Choosing to master ourselves and our thoughts in an important proficiency. Connecting to our higher power gives us the strength and confidence that we need to do that – especially when we are running low on our own.